I had low expectations for Ranthambore National Park. Extremely low expectations. I was well aware that many people leave the park without seeing its most famous resident – the Bengal Tiger – and with only 60 or so tigers in the 392 km park, I knew the odds were stacked against me. Coupled with the fact that I went on a 4 day safari in South Africa a few years ago and somehow didn’t see a single lion – I had a sneaking suspicion this safari would also be devoid of big cats.

Because I had already come to terms with the fact that it was highly unlikely I’d see a tiger, I didn’t leave Ranthambore disappointed; in fact, I thoroughly enjoyed my two-night stay. It proved to be a nice break between the chaos of Agra and bustling Jaipur, and the silence was a welcome change.

Driving through the park in the early morning, and watching the sunrise above the distant hills was one of the few moments of absolute peace I felt in Northern India. I relished in the silent moments, the naturally beautiful surroundings, and the serene atmosphere of Ranthambore. 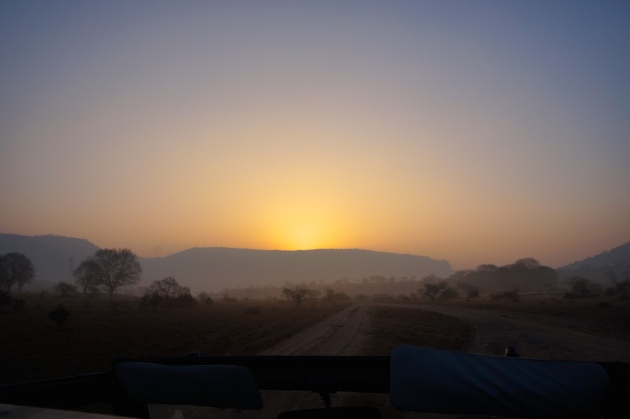 And while it can be difficult to spot a tiger in the park, there’s a variety of wildlife and impressive scenery to behold nonetheless. Beautiful banyan trees, mischievous langur monkeys, elegant peacocks, wild boar, a variety of birds, and a crocodile were a few examples of the flora and fauna we encountered during our hunt for the elusive tiger. Oh, and deer. There’s a lot of deer.

Tigers may be the predominant reason people flock to Ranthambore, but the park is home to a myriad of species: leopards, hyenas, jackals, and pythons- to name a few. When we visited, a number of people had been lucky enough to see a sloth bear, which is apparently a rare sighting.

I’ll admit there was a suspenseful moment on my final safari when I thought – just for a brief second – that I might actually see a tiger. We came across a startled herd of deer which appeared to be moving away from a potential threat, sounding warning calls as they walked. We followed them for a while, and waited in silence to see if we could spot whatever it was that spooked them. Everyone in our vehicle was completely still, holding their breath and waiting in great anticipation when we heard something: a low rumbling sound, almost like a growl was coming from… my empty stomach. I was embarrassed by the inappropriate timing and volume of my hunger pangs, and joked that maybe the growling sound would help attract a tiger. The guides were not amused.

When we returned to the hotel, I spoke with a man who had seen not one, but two tigers on two separate safaris, so I think it’s safe to say spotting a tiger is entirely dependent on timing and luck.

Is Ranthambore worth a visit?

It depends. If you have your heart set on seeing a wild tiger, it may be worthwhile to visit Ranthambore, but I would recommend staying longer than 2 nights – the more safaris you go on, the higher the chance of spotting a tiger. Other tiger reserves, like Bandhavgarh Reserve and Kanha Reserve in Madhya Pradesh are two alternative options, and (according to this article) they offer a high likelihood of seeing a tiger.

Ranthambore is located roughly between Agra and Jaipur, and it’s not too far of a detour if you’re travelling the Golden Triangle route. You can find practical information about visiting Ranthambore National Park at this website, and I found this post by Adventurous Miriam to be helpful and informative.

Have you been to Ranthambore? Or do you think it would be worth a visit? Am I the only person who didn’t see a single lion on safari in South Africa?