Potent spices, savoury curries, and pungent flavours are a few characteristics that stand out in my mind when I think of the dishes I ate in India. Indian food is as diverse as the country itself, and because I only saw a relatively small portion of the country during my stay, I feel as though I only sampled a limited selection of dishes from this varied cuisine. Regardless, the food was a huge highlight from my time in India, and each meal was memorable in itself.

It was tough to choose only a handful, but these are my favourite meals from India.

I became slightly addicted to various paneer dishes in India: palak paneer, kadai paneer, and shahi paneer to name a few, but my ultimate obsession was paneer butter masala. I can’t count the number of times I ordered this dish, and I have an embarrassing amount of photos it.

The creamy tomato gravy is a heavenly blend of spices and butter, and the soft cubes of paneer make the dish especially rich.

I’ve had this famous flatbread dozens of times at home, but it tasted roughly a million times better in India. Oven-baked until slightly crispy around the edges, and ultra soft and buttery in the centre. The added garlic made it nearly irresistible, and I couldn’t help but choose it as a side to accompany almost every meal.

This North Indian stir-fry dish is a mix of crisp-fried okra with garam masala, coriander, ginger, chili powder, turmeric, garlic, and onions. The okra was perfectly crunchy, and the dish was incredibly flavourful overall, with prominent hints of chili and onions. 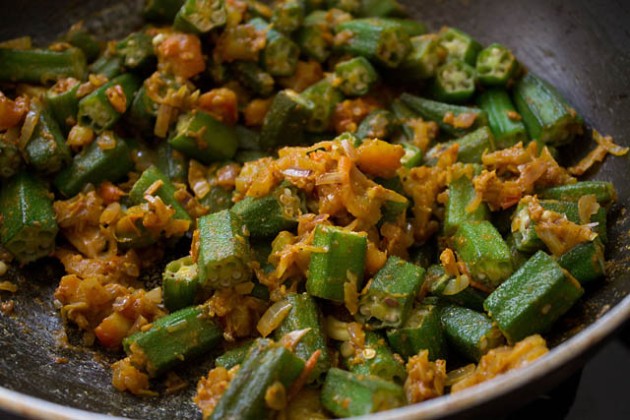 Onion and potato pakora with mango and coriander chutney

This fried snack (similar to a fritter) consists of vegetables or paneer dipped in a batter of chickpea flour with spices, garlic, and ginger, and then deep fried until golden brown.

I had onion and potato pakora, which were tasty enough on their own, but the chutneys really made this dish outstanding. The mango chutney was creamy and sweet, the coriander chutney added a hint of refreshing spice, and together they made for an incredibly delicious and flavourful combination. 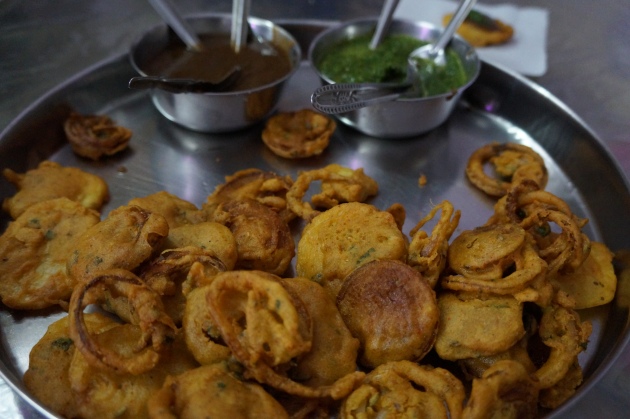 Biryani is a mixed rice dish made with spices and either fish, chicken, mutton, or vegetables.

This particular biryani was a mix of various vegetables with basmati rice, a blend of spices, cashews, sultanas, and fresh coriander. This dish was literally bursting with contrasting flavours and textures- from the fiery chili powder to the sweet sultanas, and the soft vegetables to the crunchy cashews- each ingredient was surprisingly complementary and made for a phenomenal dish altogether.

Aloo (potato) paratha is dough stuffed with a spicy mashed potato mixture, which is rolled out and cooked on a griddle with butter or ghee.

This flatbread is chewy and savoury, with notes of cumin and chili from the creamy potato filling.

Essentially a mini smorgasbord, thali is a meal made up of several types of dishes, usually served on a metal platter with small, fitted bowls.

I had a Rajasthani thali, which consisted of a delicious variety of dishes: palak paneer, rice, yogurt, vegetables, dal, chapati, papadum, and a sweet.

Charcoal is a restaurant in Udaipur known for its unique BBQ and tandoori dishes, and I couldn’t get enough of their vegetable and paneer skewers. Large chunks of bell pepper, mushroom, onion, and paneer marinated in a honey glaze, and grilled until everything is slightly crispy around the edges. The skewer is served with two dipping sauces- a refreshingly cool tzatziki and a spicy aioli. 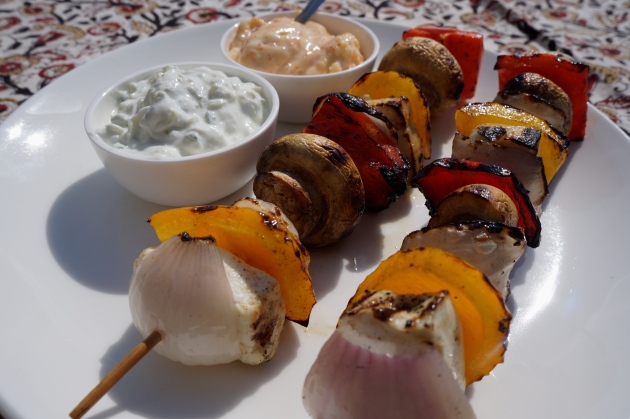 These Nepalese dumplings are popular in the far North of India- so I was a bit surprised to see them offered at a restaurant in Goa- but they were freshly made and delicious. I opted for the steamed version, and they were perfectly chewy with a flavourful vegetable filing.

I never thought I’d be adding muesli to a list of my favourite dishes in India, but the muesli from Pap’s Juice in Udaipur is quite possibly the best I’ve ever had. Crunchy granola with dried fruit, nuts, freshly chopped banana, papaya, pineapple, and yogurt topped with honey and pomegranate seeds. It was the perfect blend of crunchy granola, tart yogurt, and a delicious combination of sweet fruit.

This traditional dessert is a doughnut-like dumpling made of milk solids kneaded into a dough (sometimes with flour), and shaped into small balls, deep fried, and then soaked in a light sugary syrup flavored with cardamom and rose water or saffron.

While I couldn’t eat more than one or two at a time, I loved the soft texture and the unique and fragrant flavour from the rose water.

While this whole wheat flatbread is usually served alongside savoury meals, I sampled a simple and delectable sweet paratha dessert. The dough is stuffed with ghee, powdered sugar, cinnamon, and shredded coconut, then rolled out and cooked on a griddle. It’s slightly crispy on the outside, warm and chewy on the inside, and not overly sweet. 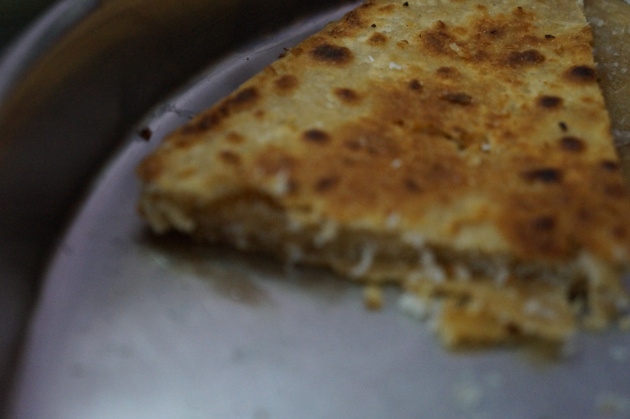 Hello to the queen

I noticed this dessert on many restaurant menus in India, especially in Goa, but the best one I tasted was from Charcoal in Udaipur.

Do you like Indian food? What’s the most memorable meal you’ve had from your travels?