Highlights and Hilarities from India

On a sunny afternoon while walking through City Palace in Udaipur, my friend challenged me to describe India in only five words. Three words immediately came to mind: chaotic, mesmerizing, and fascinating, but I struggled to choose two additional words. It wasn’t that I was at a loss for words – I couldn’t choose from the dozens of adjectives that flooded my mind.

India is crazy. It’s a place of contradictions and paradoxes; extreme wealth alongside heartbreaking poverty, cleanliness among an abundance of pollution, constant motion and deafening noise interspersed with complete quiet and solace.

India is beautiful, magical, amazing, shocking, unique, dirty – it’s all these things and more. Even though I only visited for a relatively short amount of time, India is the only country to render me completely speechless and yet unable to stop talking about it simultaneously.

I wanted to share a few of the people, places, and things that stand out most in my mind from my trip to India. The things I loved and the things that took my breath away, made me laugh, or completely shocked me. To a certain extent, I could have added almost everything that happened at any given moment on a daily basis to this list because everything in India seemed like such a unique, amazing, unusual, or ridiculous experience in one way or another.

It should come as no surprise that food tops this list. Indian food is one of my favourite cuisines and every meal in India was nothing short of mind-blowing. Thanks to a borderline obsession, I practically ate my body weight in paneer butter masala and garlic naan within the first week of being in the country. Onion and potato pakora with mango chutney, biryani, and bhindi masala are only a few of dozens of phenomenal dishes that I miss on a daily basis.

Indian people are extremely welcoming and jovial, and they’re a big reason I feel so fondly for the country. From the young man who offered to teach me Hindi words while my friend browsed in his shop, to the hilarious restaurant owner who spent an hour showing us photos of customers who were high on his “magic lassi” –  many of my memories of India include the locals.

Everything in India is interesting or entertaining-  even the things I would generally class as boring or mundane, like walking down the street or driving on the highway.

One day, while walking down the narrow streets of Udaipur, we happened upon a traffic jam. Rickshaws, motorbikes, and pedestrians all crammed together at a standstill while honking and staring at each other. After waiting on the side of the road for less than a minute, a visibly frustrated man stormed out of his shop and took it upon himself to clear up the gridlock. He started shouting and shoving, and directed vehicles to reverse or move forward where necessary. Needless to say, the traffic jam cleared up quickly with his assistance, and I enjoyed watching it all happen.

Getting off the train

The train ride from Jaipur to Udaipur was rather quiet and uneventful – until I tried to exit the train, that is.

When we arrived at the station in Udaipur, a large group of people had already gathered at the platform, waiting to get on. We started to disembark in an orderly fashion until a man decided to shove his way against the crowd and get on the train. All it took was one man, and then chaos ensued. Dozens of people (including myself) were still trying to get off, people were shoving their way onto the carriage, and the man beside me was shouting at the people on the platform.

After a few seconds of letting people onto the train, I started to panic, thinking it was going to leave the station any second, so I started to push my way through the oncoming crowd. I had my 55 litre backpack on my back and accidentally pinned a man between the wall and my backpack, and he started flailing and shouting what I can only imagine were obscenities at me. I couldn’t move to free him because people were still trying to shove their way onto the train and I was completely stuck. After a few awkward moments, he was able to free himself and I managed to disembark unscathed.

The best part? The train sat at the station for a good five or ten minutes after all the pandemonium.

The drive from Agra to Ranthambore National Park

I thought driving on the highway would be fairly uneventful, but I’m not sure I can even adequately articulate the madness that was this six hour drive.

The driver was honking incessantly and driving like a maniac (which seems to be standard procedure for the country), and he would often straddle two lanes while weaving furiously between trucks, rickshaws, motorbikes, pedestrians, cows, pigs, goats, camels, and the occasional herd of sheep.

After a while, I became more comfortable with his style of driving, but I couldn’t believe the things we passed. Buses that looked absurdly full with people hanging off the sides, back, and sitting on the roof. Families of five on one motorbike. A very recent car accident between a car and motorbike with a man laying on the road and a group of people surrounding the vehicles. A large truck with a mysterious thick, black liquid leaking from an unknown source, dripping down the back, side, and front, and almost completely covering the entire windshield.

Things seemed a bit more calm when we passed through smaller cities and countryside villages, but I couldn’t tear myself away from the window. Groups of men played cricket in open fields. Children smiled and waved. Women wearing neon-coloured saris carried large bundles of wood on their heads. And most people would stare at us with a genuine look of shock or confusion when our vehicle drove by. 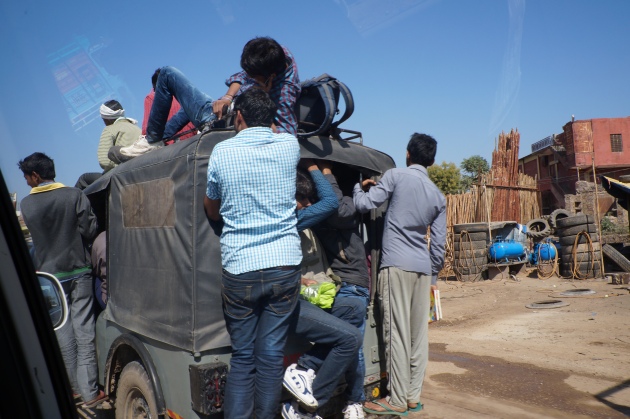 People watching in India is often an event in itself, and I think Palolem was my favourite place to do so. I can’t count the number of times I saw groups of Indian men walking along the beach in full office attire: long sleeve collard shirts, long pants, and leather dress shoes included. I also saw four Indian men swimming in the ocean shirtless with jeans and belts with large metal buckles.

I saw a countless number of people who I can safely assume were renting a kayak for the first time in their life, judging by the way they flailed and struggled to propel themselves out of the shallow area. And most tourists acted like they had never seen a cow when one walked onto the beach.

Not a day passed where at least one thing made me smile, chuckle, or completely shocked and confused me in India. Seeing a dog riding on the back of a camel walking on the side of the road, having a cow walk into a restaurant while I ate dinner (on three separate occasions), and seeing a stark naked man walking aimlessly alongside the highway are only a few of dozens of bizarre things that come to mind.

An impromptu photo shoot in Udaipur

We just wanted to buy some souvenirs when we walked into a fabric shop on City Palace Road in Udaipur, but we ended up getting much more than we bargained for.

This particular shop owner was a friendly and enthusiastic man who almost immediately offered to dress my friend and I in lovely saris and a myriad of other outfits, complete with jewellery and props.

As he dressed me in a Sherwani and turban (which is a traditional men’s outfit, by the way), he explained that he used to work as a costume designer and stylist for “the cinema.” I can only assume that he really misses his job, judging by the way he happily chose fabric colours that complemented our skin tone and how he took such careful consideration with the tiniest details when dressing us.

After styling each outfit, he made us pose in various positions with him around his shop and had his friend take multiple pictures. After an hour or so of changing outfits and taking photos, he offered us mango juice and finally let us browse around his shop.

What’s the “craziest” country you’ve ever been to?